As she was preparing for D1 Prospect Camp she looked through a list of logos for all of the colleges that would be there. “What school is this?” she asked as she pointed to an image of a red bird. “I don’t know,” I say.

Ball State University was one of the main school’s to pay attention to her at the camp. She worked extensively with the Associate Head Coach, Josh, and found out that day what school that bird belonged to. Their motto, “as cardinals, we fly.”

“I want a shirt that just says BALL, or SOFTBALL,” she said to me several months ago, months before she knew Ball State existed. Mostly she liked the idea that ball was the thing she was most interested in. It didn’t have to be attached to a place. Maybe it was already attached in her psyche. Like my Synchronicity Coach, Cynthia, says: “the psyche knows.”

“Are you ready for some news?” she asks as I answer the phone. “I have an official visit next week. They’re going to make an offer.” I scream in sheer delight. It’s the news we’ve been anticipating over the last several months. Prayers are being answered. Life has been a struggle for both of us. Might we finally find ease?

I look up the Ball State logo last night. It’s a cardinal. It has long been the belief in many cultures that the cardinal is a sign from someone who’s passed. I think of mom each time I see one. Is that a sign that Ball State is where she belongs? It wasn’t on her radar until just a few months ago, yet it feels very right to me. Maddie thinks of her nana and her Papa Keith each time she sees a cardinal. Maybe they are both pointing her there.

The mascot’s name is Charlie Cardinal. In numerology his name adds up to a ONE. Does that mean anything? I’m a one in terms of my birthdate. Ones also stand for new beginnings and independence ….

The only thing she’s been worried about is her ACT score. She’s taken it twice and hasn’t scored well. Though her grade point is a 3.5, she doesn’t do well on standardized tests. But we just got off the phone and Ball State announced only FOUR DAYS AGO that the ACT/SAT is now OPTIONAL for admission. What? Truly amazing news. Synchronicity in action.

Photo by Ray Hennessy on Unsplash

More Broken Than Me

Life has given me many labels throughout the years: happy wife, softball mom, empath, INFJ, university professor, writer, blogger, digital media expert,  brand marketer, yoga + pranayama teacher, embodiment educator and more, and while this blog may speak through some of those lenses, it’s not meant to highlight any of them specifically.

I see soul fabric as an outlet for my process as a human. I write about things I love and am pondering or passionate about. I’ve heard many times, ‘write for yourself,’ so I try to do that, knowing we’re all more alike than different. You might find posts about a yogic lifestyle one day, journaling prompts the next, and on other days I might share excerpts from poetry, a book I’m loving, slow living tips, embodiment exercises or none of the above. Yeah, I’m kinda all over the place; aren’t we all?

I am also a maker/creator at my core. My passions include reading, writing, hiking, sewing, snail-mailing and art journaling – all practices in mindfulness to me. Please enjoy and connect with me via email, social media (links above), or {READ BIO} if you’d like to learn more. 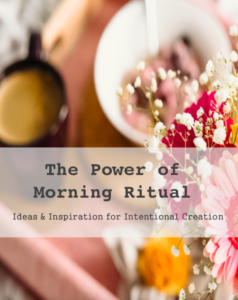